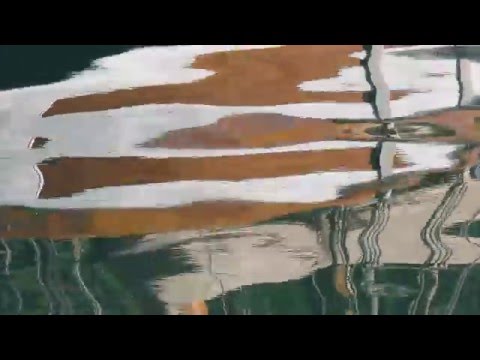 Beeld: Merel Dames
Geluid: Akke Houben
februari 2016
The oscillatory movements of the waves and the water and the unseen force that pushes matter and the inertia of the matter which returns to its former position, these are the elements which caught our attention when we recorded the sounds and video in Barcelona in november 2015. This became the starting point for a 2:20 minutes audio-visual work full of vibrating and shifting planes, lines and elements. The work focuses around the exchange between the loose particles of the water and the emergent action that arises from their connection, their intercambio of forces, and the exchange of forces between the sound, the video, the artists, their surroundings – their territories and territorial movements.
Musically the spectral and rhythmical structures of the sounds are derived from the intervals of waves recorded on a quiet morning at the beach. In the first part of the composition the intervals are taken as the ratios of the partials of the sounds and as the different timescales of the rhythmical lines, creating a structure of constantly changing polyrhythm without a central organisation, determined by the interplay between a sound and its neighbouring sounds. Relations which are constantly fluid that engage in a dance with the oscillating movements in the video. In the middle and the end of the composition two tone-row melodies explore the in-dividual character of a sound, sometimes sounding synchronous and at other times temporally divided, but still functioning as a somehow tied-together element in the composition.
The video captures the vibrations of the water by focussing on the reflections in the water, a peculiar balance between abstraction and form is found by a constantly but smoothly and calmly changing water surface. The things visible in the video keep a fluid character, it is never fully understandable what is reflected and which lines, colors and planes belong together. These lines, colors and planes are caught up in a vivid dance in which they explore and sense their surroundings. In this movement the video seems to loose its realness, the question arises whether this video is recorded in an existing scene without any digital manipulation or completely a product of digital manufacturing..
In the whole work the absence of a moving force is what clearly stands out. The sounds are excited by a unheard and unseen action, the water is moved constantly but for this no cause can be found. The thing which plays the elements of the sounds and the video images is absent, only the resulting movements and countermovements are visible and here is where the music and the video find each other. The a-synchronicity, the independence of the music and video finds its resolution in similar movements and the possibility of a similar driving force.